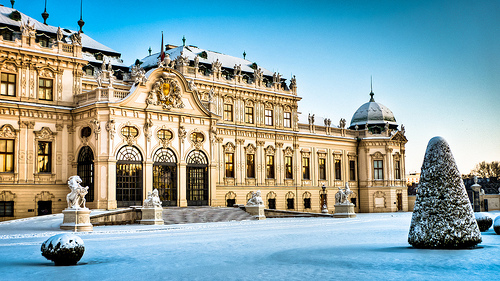 05.02. – Coming to Hotel, the accomodation, optional leave for Vienna sightseeing, accompanied by the local experienced guides. Sightseeing of the former Habsburg capital, now one of the leading cities of European culture: Belvedere, Karlskirche (Charles’ Church), Karlsplatz (Charles’ Square), Musikverein (Music Society, the host of the famous Vienna New Year’s Concert), Sezession (Secession), Naturhistorisches Museum (Museum of Nature History), Kunsthistoriches Museum (The Art History Museum), the big circular boulevard Ringstrasse with the Parliamentom, Burgtheater, The City Hall (Rathaus), Votivkirche Church etc. the walk thorugh Hofburg and the city centre Stephansplatz (St. Stephen’s Square) and Stephansdom (St. Stephen’s Church). After the sightseeing, the free time. Overnight stay.
06.02. Breakfast. After the breakfast the Folklore troops will be preparing for the show. The sound rehearsal. The Festival opening. Optional: Common friendly party of the participants from all troops! Overnight stay.
07.02. Breakfast. After the breakfast the optional sightseeing of the unique summer palace of the Habsburg dynasty Schönbrunn. While walking thorugh the lavish rooms of the edifice, you will feel the power and the wealth of the ruling dynasty. After the sightseeing of the inner palace, walk through the grandious garden and the creations of the Schönbrunn gardeners. Make the most beautiful photos the Gloriette viewpoint.

The time for the free activities in the city centre. In the afternoon there is a possibility of optional sightseeing of the highest building in Austria, the famous Danube Tower, where you can have the wonderful view to the city and its surroundings. All
participants have to go (regretfully) to their own point of return with the hope to see each other next year!!!!! 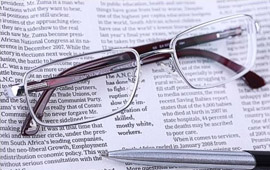 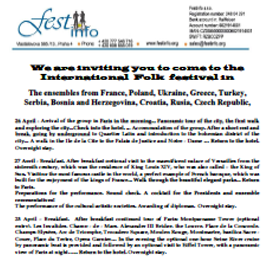 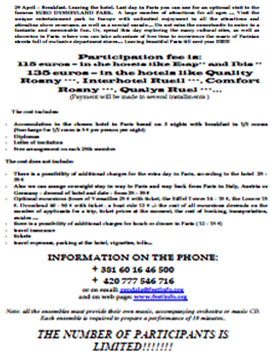 Vienna, Austria’s capital, lies in the country’s east on the Danube River. Its artistic and intellectual legacy was shaped by residents including Mozart, Beethoven and Sigmund Freud. The city is also known for its Imperial palaces, including Schönbrunn, the Habsburgs’ summer residence. In the MuseumsQuartier district, historic and contemporary buildings display works by Egon Schiele, Gustav Klimt and other artists.

Until the beginning of the 20th century, it was the largest German-speaking city in the world, and before the splitting of the Austro-Hungarian Empire in World War I the city had 2 million inhabitants. Today it has the second largest number of German speakers after Berlin. Vienna is host to many major international organizations, including the United Nations and OPEC. The city is located in the eastern part of Austria and is close to the borders of the Czech Republic, Slovakia, and Hungary. These regions work together in a European Centrope border region. Along with nearbyBratislava, Vienna forms a metropolitan region with 3 million inhabitants. In 2001, the city centre was designated a UNESCO World Heritage Site.

Things To Do in Vienna – Attractions & Must See

Hofburg Imperial Palace
Hofburg imperial palace complex in the heart of Vienna, the official residence of the President of the Republic of Austria. Since 1438th the 1583rd and than in 1612. up in 1806. The building of the Hofburg was the residence of the kings and emperors of the Holy Roman Empire, and later Emperor of Austria-Hungary until 1918. godine.Danas this huge palace complex is home to the National Library, the Ministry of Finance and the Ethnographic Museum.

Cathedral Stephansdom
Stephansdom (translated from the German Cathedral St. Stjepan) the Vienna cathedral on the square Stephansplatz (St.. Stjepan) in the center of town. It is the seat of the Archbishop of Vienna and the Vienna of the Catholic Church. Because of its picturesque roof is made in a zig-zag style and 136.7 m high tower that dominates the skyline of the city, it is one of the most recognizable symbols of Vienna. Stephansdom is burned during the Battle of Vienna in April in 1945., So thoroughly reconstructed after the war, until in 1952.

Esterhazy Palace
The most important cultural attractions Burgenland is the main residence of the royal family, more than three hundred years. With its ceremonial furniture, magnificent rooms are living reminders of the noble past and life at court. The road leading to the palace famous concert halls Haydn, who has the best acoustics in the world, and it initially worked and worked composer Joseph Haydn, by which the palace was named.

Danube Tower – Donauturm
If you want to enjoy the spectacular views over Vienna, then this is the perfect place for you! Both Vienna Citizens tower called “Concrete needle ” (“Concrete needle “). Is 352 meters high and is made for 20 months. Near Danube Tower is Uno city where the headquarters of the United Nations, and looks like a city within a city with its modern architecture.

Hundertwasser House
Hundertwasser House Vienna is one of Austria’s architectural achievements. The house was designed by Friedensreich Hundertwasser, and it now attracts visitors from all over the world. More than 200 species of trees and shrubs on the balconies and terraces krovovnim, turn this house into a green aozu in the city center. Not open to the public and can be seen only from the outside.